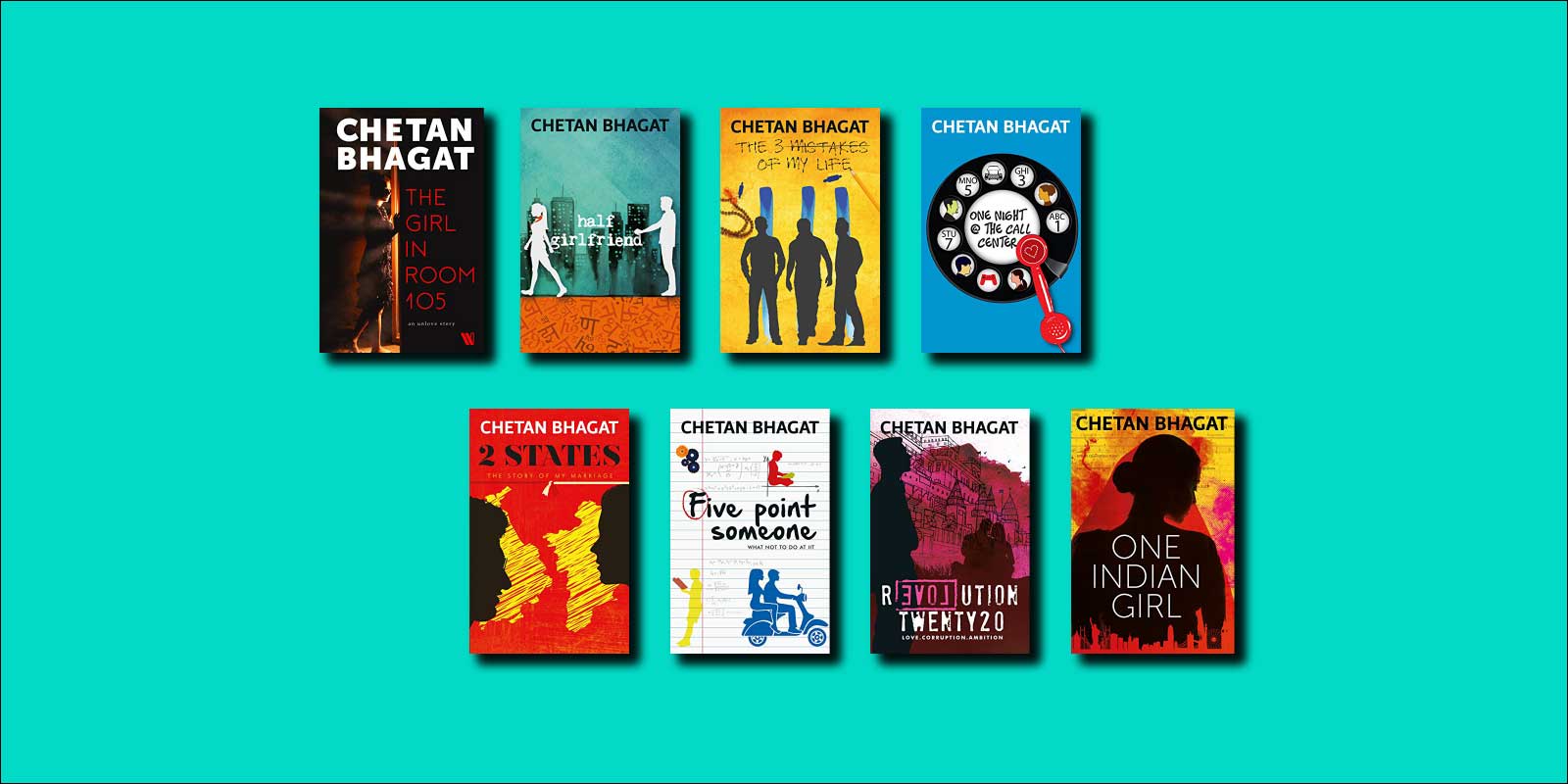 Chetan Bhagat is one of the best selling Indian authors when it comes to Fiction and Romance. It is so popular that some of his books have been made as Bollywood movies.

The reach of his books among Indians might be due to the use of simple language that even non-native English readers find it easy to read and understand. And that’s a good reason for beginners to get started with the habit of reading books.

Well that said, let us have a look at some of his best selling books which you might consider buying in 2020

Here is a brief list of the best Chetan Bhagat books.

Let’s look at those books one by one. This book is based on the story of Madhav and Riya. Madhav was a Bihari boy and he fell in love with a girl, Riya. They were exactly the opposite. When Madhav couldn’t speak English well, Riya could. When Madhav wanted a relationship, Riya didn’t. And when Riya wanted a friendship, Madhav didn’t. And that’s how things progress in this simple story when Riya eventually agreed to be Half Girlfriend.

Overall I really liked the book and this one is right on top of CB’s books along with 2 states. Enjoy the read! – Anjaan Saahil

An evidently unrealistic story (and now a Bollywood feature film) of a couple, where the girl indirectly friend zones the guy by entitling herself as his “half girlfriend” and ghosts on him. The guy (Maadhav) tries to find her and they finally reunite in a faraway country and they live happily ever after. I would recommend this only to melodrama lovers who like mainstream love stories. – Pitaara This was the recent book from Chetan Bhagat. And it involves around an IITian Keshav. He had a girlfriend Zara from Kashmir. After Zara broke up, eventually she had moved on life. But Keshav could not and drank every night to forget her. Until one day, Zara eventually messaged him on her asked and asked him to come to her Hostel Room 105. And what happens at the room is the story all about.

“The girl in room 105” is just the perfect material for a Bollywood romantic thriller. A book which has romance, thrills, humor, drama, suspense & then a couple of neat twists in equal measures, it makes for an easy-breezy read that is simple, uncomplicated & yet pretty engaging. – Rajesh Choudhary 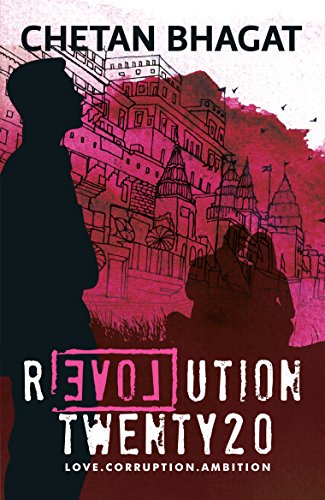 Unlike other books of Chetan Bhagat, the book has got its mix of Love, Politics, Ambition, etc. It begins with the story of two Childhood friends Gopal and Raghav. Their ambition in their life was different. One wants to make money while the other wants to make a revolution. Irrespective of their varied ambitions they both loved the same girl, Aarti. And that’s where the story begins to take up its pace. At the end of the story, how you judge the character of the protagonist, Gopal. A question left to be answered.

A real heart touching story. This is the novel which engaged me in non-stop reading. At the end of the novel, I felt like I need second part of this novel. I couldn’t stop thanking @chetanbhagat for writing such a beautiful novel. It really worths. Looking forward to read more books of Chetan Bhagat. – Theyellingsolitude

4) 2 States: The Story of my Marriage While marriage is all about two hearts falling in love and deciding to tie the knot in various parts of the world, India remains in a parallel universe. Indeed it is the marriage of two families too. Being a secular country with 22 major speaking languages, and numerous differences among people, convincing two families is not a joke. Look out for the drama.

Chetan Bhagat has portrayed the major problem, which is faced by many lovers in India. This book is worth reading. The content has loads of love, humor, passion. So when these families fight it gets humorous. With elements like laughter, love, passion, fun, and melancholia weaved in together to create a complete novel, it really is a pleasure to read. – reading_booktales

This book is autobiographical, written with the characters’ name altered. This is a very interesting and fun read, to get to know more about the cultures of Indian families. Chetan Bhagat has done a very good job in portraying the characters and in the end gives a strong message of equality and love.⁣ – Book reviewer The protagonist, Radhika Mehta is an investment banker at Goldman Sachs, has a problem with the ‘inner Radhika’ which has an opinion on anything and everything. She is rich in terms of money and with boyfriends too. That’s Two. And eventually about to get married to the third. So how does life unfolds to Radhika after this?

Well, I just told about the ride from surface in which you might get consumed if you will read. This is a wonderful story about Keshav and his adventurous journey. The story of Zara and Keshav was somehow ended by unloving. You can call it a mystery too without taking a second thought. The pages will invite you to unfold. Overall if you want to read a romance thriller book I will highly suggest this book. Chetan Bhagat’s fans will never miss it. I my words : This is one among the best work of Chetan Bhagat. – Bookish Me It is an interesting story about the life of Govind, a boy from Ahmedabad. He has two friends Ish and Omi and they all three are fond of cricket. Govind has a dream of owning a business. And eventually they three have become entrepreneurs to open a cricket goods shop. So what happens among the three friends? And what are the 3 mistakes of Govind’s life?

I just finished reading “The three mistakes of my life“. The only regret I have is why didn’t I read it earlier. When I started off reading it I got mixed reactions, some said its good, some said its bad, so I made a decision to dig into it and find for myself. The book has fiction (if you thought it’s about Chetan’s life, you’re wrong:-)), sentiment, romance, social message, business, life, relations, religion, and in fact Cricket. The unique thing I found in this book is that Chetan has addressed a sensitive issue in the most sensible way possible. He has presented the facts, narrated a story in a neutral way. – Jignesh Machhi

Author makes it plain sailing, that we could guess every end without any twists and turns (can find it rarely). Just give it a try without any expectations.? – Gryffindor girls

7) One Night at the Call Center As baseless as the storyline seems so is the movie made on it and to some extent, it’s worse. The book was like a pit stop for me and now that I’m so dissuaded, I won’t buy my time and energy for some tantalizing title like “One Night at the Call Center” in near future, AGAIN! – Coffee Stains and Parchments The story is about three friends Hary, Ryan, and Alok. Each one has got an individual story/situation to reach IIT. They are not like the usual toppers and what these three friends go on with their 4 years of Engineering is all the story about.

The book brings us into friendship, shows the ugly truth behind the life of an average student. Their struggle, discrimination they face, friendship, and their love. The book remains one of the most successful writings of Chetan Bhagat – Dopaminer

We hope, you guys enjoyed the article and make sure you pick a few books out of the list to spend your time with.

If you have already read any of these books, do share your reviews in the comments section. If it is too good, probably we will feature them in the article.